In this assignment you will learn to do a repeated measures ANOVA.

Running a RM ANOVA is easy to do in R. 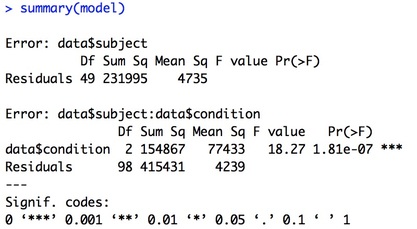 You will note one key difference in the aov command, and that is the Error term. If you recall the theory behind RM ANOVA, you are removing between participant variance from the overall error variance. This error term accomplishes just that.

The reality is that in R the test of this assumption is not as easy as one might think. Indeed, it is easier to just run the RM ANOVA using the ezANOVA package.

Post-Hoc Analysis of RM ANOVA
To post-hoc this data all you need to do is run a series of pairwise comparisons:
pairwise.t.test(data$data,data$condition,paired=TRUE)
Another option would be to conduct a trend analysis, this will be described in full in assignment 7D.

Assignment 7C
For the data HERE, run a complete repeated measures analysis. Test all of the assumptions, run the ANOVA, and complete a pairwise post-hoc analysis