In earlier lessons you learned how to test to see whether or not two groups differed - an independent samples t-test. But what do you do if you have more than two groups?

The first case we will examine is when you have three or more independent groups and you want to see whether or not there are differences between them - the test that accomplishes this is an Analysis of Variance - a between subjects test to determine if there is a difference between three or more groups.

Analysis of Variance (ANOVA) is a complex business, at this point you need to find a textbook and read the chapter(s) on ANOVA. For a quick summary you can go HERE, but that is not really going to be enough.

Load this DATA into a new table called "data" in R Studio. You will note the first column indicates subject numbers from 1 to 150, the second column groups codes for 3 groups, and the third column actual data. Rename the columns "subject", "group", and "rt".

Lets define group as a factor. Remember how to do that?
data$group = factor(data$group)

Before we actually run an ANOVA we need to test the assumptions of this test. What are assumptions? In short, each statistical test can only be run if the data meet certain criteria. For ANOVA, there are four assumptions that you need to meet.

Assumption One: Between Group Independence. The groups are independent. Essentially, your groups cannot be related - for instance - if you are interested in studying age this is easy - a "young" group is naturally independent of groups that are "middle aged" and "elderly". This may not be as true in all instances and you need to be sure. Note, there is no statistical test for this, you need to use logic and common sense. For example, the means and variances of a group may be identical but they can be truly independent. Consider this - you are interested in how many calories a day people eat. You create a group in Berlin, Germany and Auckland, New Zealand and find they eat the same number of calories per day as reflected by the means and the variances. These groups are most likely independent but they share common statistical properties.

Assumption Two: Within Group Sampling and Independence. The members of each groups are sampled randomly and are independent of each other. This relates to research methods and is beyond the scope of this tutorial, but typically we do the best we can here.

In spite of this, most people like to test whether the data is normally distributed or not. Here are three ways to do this: 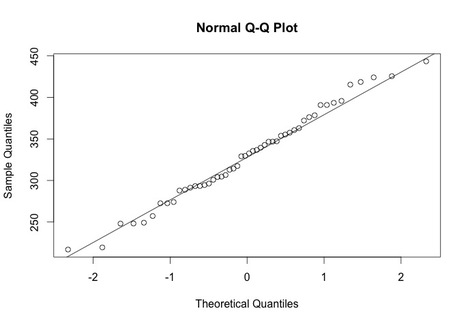 Assumption Four: Homogeneity of Variance. ANOVA assumes that the variances of all groups are equivalent. There are three ways to test this.

a. Plot Histograms (ensure the number of bins and axes are the same) and visually ensure that the variances are roughly equivalent. See above.